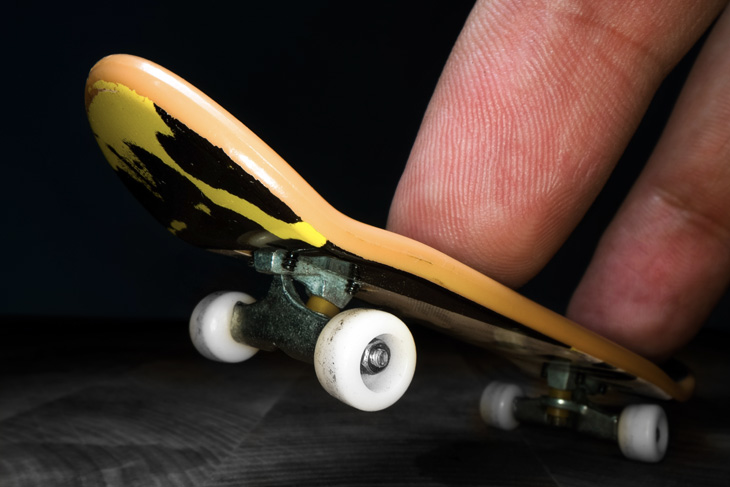 The hardflip is similar to a shove-it but requires the board to be rotated 180 degrees vertical instead of horizontal. To perform this trick, start the same as you would a kickflip, but also tilt your wrist down, so the board makes a half rotation as well.

The impossible is similar to 360 shove-it. However, this trick requires you to flip the board 360 degrees backward. You can envision this trick as backflipping your fingerboard. Use your back finger to pop the tail down. Instead of catching the board with your front finger as you would for a kickflip, you use your rear finger to scoop the board toward you to control the rotation and complete a full flip.

The double kickflip (and eventually triple kickflip) is a trick that seems easy enough after you master a single kickflip. However, the most significant part of a successful double kickflip is the control of your fingers. To perform this trick, you must pop the tail of your board down faster while catching or tapping the board harder with your front finger. The push of your back finger on the tail controls the height while the push of your front finger on the front inside part of the board controls the spin. To land this trick, you must have perfect control of both fingers.

If you want to make any of these incredible fingerboarding tricks even more complicated, consider doing them switch, adding extra rotations of the board for a 180, 360, or 540, or landing them on a rail for a grind. You can perform one trick onto a grind rail, then finishing by performing an additional trick before landing. Enjoy the time it will take to master these incredible fingerboarding tricks.

Fingerboarding has become much more than a hobby over the years, and there are some truly amazing things about the hobby and sport. Here are ... Read More

How to Get a Fingerboard Sponsor

Let’s hear it for our more experienced readers out there! This article is for you! Let’s say you’re an advanced fingerboarder and are looking to ... Read More

How to get Better at Fingerboarding

In this article, we’ll take a look at practice techniques to help you improve your skills and practice getting better at fingerboarding. But before we ... Read More

NEWER POSTWhat Makes up a Fingerboard?
OLDER POSTBeginners Guide Finger Board Set up